An independent investigation has found that two police officers displayed bravery in tackling a man armed with a large meat cleaver.

The officers suffered serious injuries following the incident involving a 25-year-old man in Wishaw on Sunday 14 June 2020. The man was treated for a laceration to his head.

An investigation report by the Police Investigations and Review Commissioner (PIRC) was submitted to Police Scotland in September 2020. Following the conclusion of criminal proceedings against the man, details of the incident can be published.

Just after 10pm, two officers were dealing with a separate incident when the man began to shout abuse at them before entering the block of flats. One of the officers entered the close to warn the man about his conduct. As he did so, the man drew a meat cleaver that was concealed in the rear waistband of his trousers, and struck the officer on his hand causing a deep laceration and broken bones before he retreated into his flat.

As the second officer stood at the entrance to the close, the man came out of the flat and lunged at him and repeatedly punched him on the face. The first officer then re-entered the close and in an effort to defend themselves and prevent further assault, both officers struck the man on the head and arms with their batons. This had no effect on the man who continued to assault the second officer. The man then retrieved the cleaver from his flat and repeatedly struck it at the head and body of the second officer resulting in part of the officer’s finger being severed and being struck on the head with the cleaver. The man then re-entered his flat.

After more officers, some in possession of public order shields, arrived at the scene, a containment was placed on the building. The man came out of the flat and was arrested, but on approaching a police van he struggled violently, lunged forward and struck his head on the side of the van.

The man was eventually restrained and taken to Monklands Hospital, where he was treated for a laceration on his head he sustained during the incident. The injured officers were taken to University Hospital, Wishaw, for treatment to the serious injuries they had sustained

The PIRC investigation found that the two officers displayed bravery in tackling the armed man and that use of batons by the officers on the 25-year-old man was necessary and proportionate due to the violent and life threatening nature of the man’s assault on the officers. It also found that the subsequent use of force by other officers to arrest him was justified given the level of resistance shown by him during his arrest.

Meanwhile, in another incident, a British Transport Police (BTP) officer discharged Captor Incapacitant spray during the arrest of a 20-year-old man on Monday 24 February 2020, following an earlier incident within Paisley Gilmour Street Railway Station in which it was alleged the man had indecently exposed himself.

BTP officers found the man, who appeared intoxicated, at the station in the company of others. Following a struggle, he assaulted both officers and ran away.

He was pursued by police officers and during the chase, the man turned towards one of the officers and adopted a threatening stance. Fearing for her safety, the officer discharged her Captor Incapacitant spray at the man in the County Square area of the town. The man ran off and following a violent struggle was apprehended by other officers.

An independent investigation found that given the demeanour and actions of the man and the resistance shown to the police officers, the discharge of the Captor spray was necessary to ensure the officer’s safety.

The report by the Police Investigations and Review Commissioner (PIRC) was submitted to BTP in June 2020. Following the conclusion of criminal proceedings against the man, details of the incident can be published.

You can read the findings in both reports HERE. 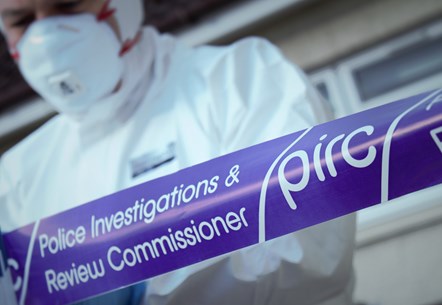